On April 21, I posted a video link to a C-Span recording of a session filmed at Monticello regarding interpreting slavery at historic sites. Much of this is centered on a project at Monticello to reconstruct in part or in full Mulberry Row, a series of outbuildings, plantation industrial buildings and slave quarters which sat adjacent to Jefferson’s twice-built mansion. 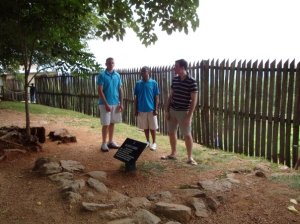 The author (center) with two friends at the site of a slave cabin along Mulberry Row at Monticello in 2008.

Having had time to fully listen to the conversation I had a few thoughts and a few questions for y’all.

As you’ll see if you watch the video, a lot of the discussion is centered on past case studies of reconstructions of buildings at Colonial Williamsburg and Ashlawn-Highland and methods of interpreting space not reconstructed consume the conversation of Dr. Reeves and Frank Sanchis. However, there were some points made by the panelists and the audience that I think bear repeating.

Sara Bon-Harper reminds us that we often only see the plantation core such as the big house and a kitchen and perhaps a few other outbuildings when visiting historic plantations. We therefore miss the larger plantation landscape. Quite often, this is because a historic site only includes that core as previous owners only saved that core or sold the agricultural and woodlands associated with the estate years ago. Where those lands remain, visitors are either too pressed for time to explore the many acres or there is limited access to those fields provided by the site. Furthermore, unlike in the era of slaveholding, there is usually nothing in the fields now but meadow grasses or woodlands that were not there historically.

Ed Chappell brings up a good point regarding the reconstructed Peyton Randolph slave quarter/kitchen/servants’ hall and the current interpretation there. While the reconstructed spaces contribute to broadening our understanding of the Randolph family and urban slavery in Williamsburg in the eighteenth century, often now when people are cooking in the Randolph kitchen it is being done by white employees. They certainly are well intentioned but Chappell (and I) wonder what type of message does that send? Are people really understanding race relations in eighteenth century Virginia or becoming focused on the cooking demonstration?

The thought of what kind of message are we sending is echoed in Reeves’ comments about the Montpelier slave descendants coming to see Montpelier after the exterior restoration was finished. They were not impressed with the railroad ties and grass representing where the slave housing existed in the Madisons’ time. The foundation has currently installed three-dimensional timber-framed half-finished ghost structures to represent smokehouses and slave quarters. As Reeves states, these buildings juxtaposed with the mansion house create an interpretive tool.

Mr. Sanchis’ comments were centered on his passion for preserving original buildings. He recognized several times that there are few original slave quarters remaining but was generally opposed to reconstructions of missing buildings. Often times, I admit, I found myself in strong disagreement with his commentary especially regarding visitors ability to distinguish reconstructed versus restored buildings (though some of the audience discussion seemed to reaffirm his position; I still think most people can make those distinctions when told). Frank’s comments regarding the Arlington original slave quarters being so altered that he did not feel the originality was curious to me since I had just been to them. While it is true, there have been many changes to those quarters since the 1800s, I still felt the power of them in my recent visit there (which I blogged about). One of the projects Arlington is doing now is restoring one of the buildings with better attention to the details than had been done in the 1930s-1950s when they were interpreted honestly as cottages. One thing he said I agree with, however, I’m curious what you think so I will pose the question later.

One comment from an audience member who works at Colonial Williamsburg is only partly true. While there have been various Blacks affiliated in some manner with Colonial Williamsburg as an operation it is not true that Blacks have always been seen interpreting the experience of eighteenth century free blacks and enslaved people. At least by the 1950s and 1960s, Colonial Williamsburg operated on a specific day of the week for African-Americans to visit the site. Like nearly everything, Colonial Williamsburg was segregated. Recently, a new acquaintance of mine, Tiya Miles reminded folks at a conference to consider that Blacks often had no clue how they would get from their home to a vacation site during the era of segregation and racial violence. Hotels and restaurants often would not serve Blacks and stopping to get gas had the potential to get violent or at least uncomfortable.

Annette Gordon-Reed brought up a concern that reconstructed (and the few originals remaining) slave quarters are often seen as “quaint” by visitors (as was the earlier furnishing of the Arlington slave quarters in the 1940s and 50s) and she wonders how we can make this not seem the case.

Finally, I thought one of the audience members made an amazing point that I was emphasize. Slavery should be interpreted at plantation sites throughout the mansion house tour. Segregating the story to a separate tour, making slavery seem like a beneficial institution for all, or ignoring the story is not acceptable. There are artifacts of slavery in the mansion houses at these sites: who poured wines and served meals in the dining room? Who made the beds in the bedrooms? Who lit the fires throughout the house?

So on to my questions for you (and I hope to hear from y’all with some thoughts/answers/maybe more questions):

So what do you think?